An app template serves as a way for users to upload, deliver and manage apps. Generally, an app is composed of one or more Kubernetes workloads (for example, Deployments, StatefulSets and DaemonSets) and Services based on how it functions and communicates with the external environment. Apps that are uploaded as app templates are built based on a Helm package.

You can deliver Helm charts to the public repository of KubeSphere or import a private app repository to offer app templates.

The public repository is also known as the App Store in KubeSphere, accessible to every tenant in a workspace. After uploading the Helm chart of an app, you can deploy your app to test its functions and submit it for review. Ultimately, you have the option to release it the App Store after it is approved. For more information, see Application Lifecycle Management. 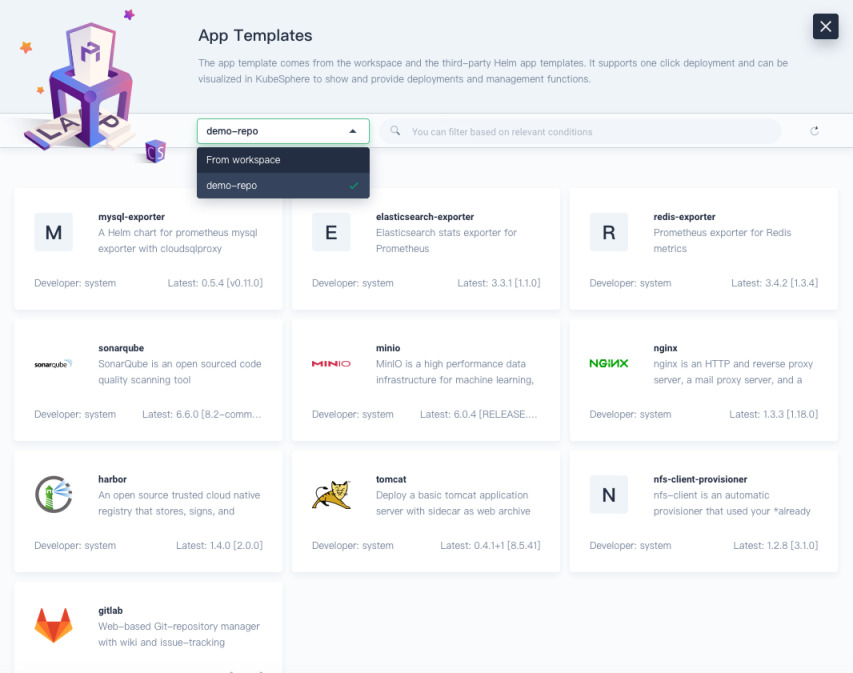 KubeSphere deploys app repository services based on OpenPitrix as a pluggable component.

App templates enable users to deploy and manage apps in a visualized way. Internally, they play an important role as shared resources (for example, databases, middleware and operating systems) created by enterprises for the coordination and cooperation within teams. Externally, app templates set industry standards of building and delivery. Users can take advantage of app templates in different scenarios to meet their own needs through one-click deployment.

In addition, as OpenPitrix is integrated to KubeSphere to provide application management across the entire lifecycle, the platform allows ISVs, developers and regular users to all participate in the process. Backed by the multi-tenant system of KubeSphere, each tenant is only responsible for their own part, such as app uploading, app review, release, test, and version management. Ultimately, enterprises can build their own App Store and enrich their application pools with their customized standards. As such, apps can also be delivered in a standardized fashion.

For more information about how to use app templates, see Deploy Apps from App Templates.