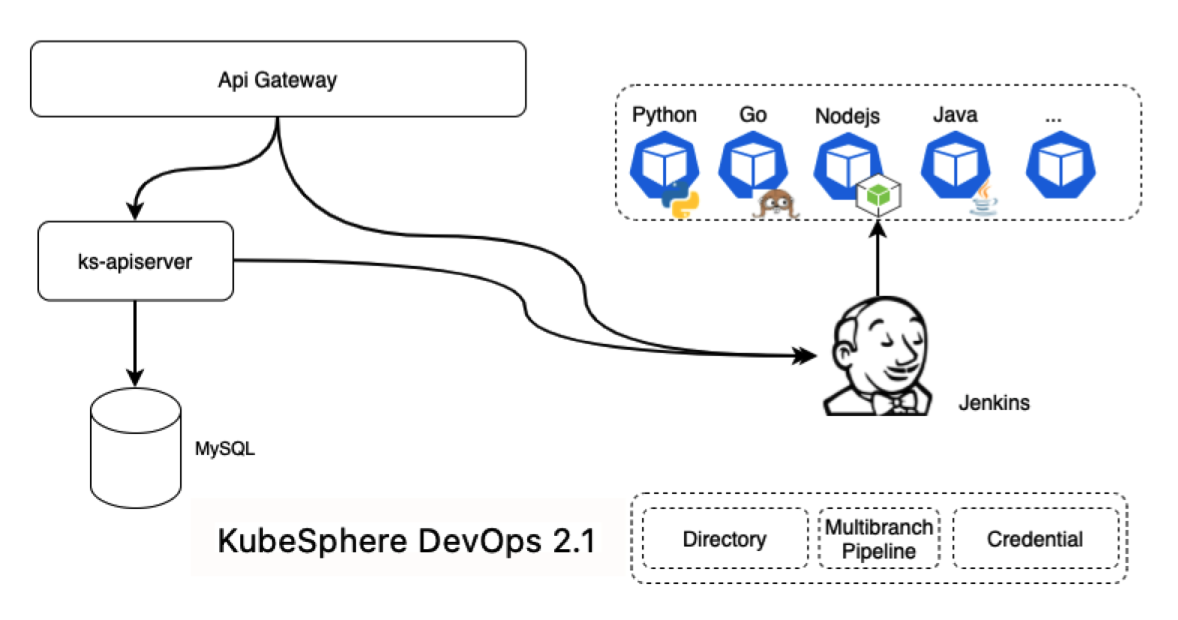 In KubeSphere v2.1, the DevOps data are stored in Jenkins, while MySQL in KubeSphere stores authorization information and corresponding relations among projects, pipelines, and users. Frontend users make calls to the Api Gateway to get authentication from ks-apiserver and then connect to Jenkins.

Another special type is /kapis/jenkins.kubesphere.io, which is directly passed to Jenkins through the Api Gateway and mainly used when archive files are downloaded. 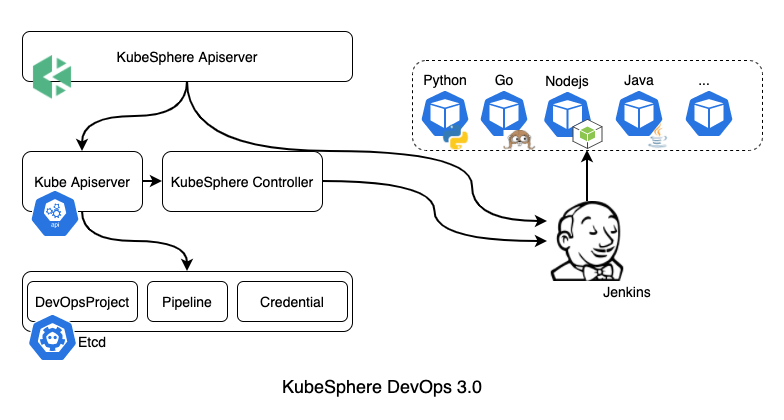 In KubeSphere v3.0, the DevOps data are stored in CustomResourceDefinitions (CRDs). The data in the CRDs are synchronized to Jenkins in an one-way direction, and any previous data with the same name will be overwritten. There are mainly two types of operation - creation and triggering.

Creation mainly involves three CRD types, including DevOps projects, pipelines and credentials. Users make calls at the frontend to the interface of ks-apiserver to create resources and store them in etcd, and then ks-controller-manager keeps synchronizing those objects to Jenkins. Triggering mainly entails instant actions, including running a pipeline and reviewing a pipeline. Users make calls at the frontend to ks-apiserver, and then, after data conversion, directly make calls to the Jenkins API.

When you upgrade KubeSphere from v2.1 to v3.0, the process of data migration follows the steps shown below:

Data comparison before and after the migration:

You must back up the data in advance because the data in Jenkins will be overwritten by ks-controller-manager once the CRDs are created during data migration. You can use Velero to make a PVC-level backup, or back up the /var/jenkins_home directory of the Jenkins Pod directly.

For the pipelines created on the KubeSphere DevOps page, migration can be carried out as normal. However, the pipeline configurations directly made on the Jenkins dashboard might get lost during the migration.

Migration through a Job

This plan applies to the scenario where DevOps operations are only performed on the KubeSphere DevOps page. You can upgrade KubeSphere directly, and if there is no DevOps resources available after the upgrade, rerun the upgrade.

No migration for the previous data

Generally speaking, you cannot specify these configurations in a Jenkinsfile as they are not part of the logic as a pipeline runs.

If you have specific needs for these configurations, you can keep your previous data unmigrated and manage new pipelines on the KubeSphere DevOps page.

Do not create pipelines with the same name under one DevOps project, or the data in Jenkins will be overwritten.

If you only have few configurations to be specified on the Jenkins dashboard, you can use KubeSphere DevOps to manage pipelines directly. For these users, they can make a backup first and then migrate part of the data by using a Job while fixing pipelines with special configurations later.

You can also use the following command to rerun the Job for migration.