Source-to-Image (S2I) is an automation tool for building images from source code. S2I injects source code into an Image Builder for compiling and then automatically packages the compiled code into a Docker image.

For more information about how to use S2I in KubeSphere, refer to Source to Image: Publish an App without a Dockerfile. Besides, you can refer to the code repositories S2IOperator and S2IRun for more details.

For interpreted languages like Python and Ruby, the build-time and runtime environments for an application are typically the same. For example, a Ruby-based Image Builder usually contains Bundler, Rake, Apache, GCC, and other packages needed to set up a runtime environment. The following diagram describes the build workflow. 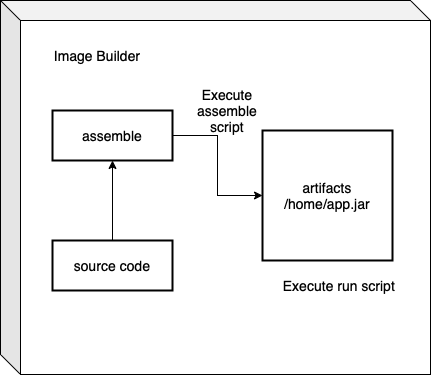 See the S2I workflow chart as below.

For compiled languages like Go, C, C++, or Java, the dependencies necessary for compiling will increase the size of resulting images. To build slimmer images, S2I uses a phased build workflow with unnecessary files removed from images. An artifact, which is an executable like a Jar file or binary file, will be extracted when building finishes in the Image Builder, and then injected into a Runtime Image for execution.

See the building workflow as below.

Previous : Binary to Image: Publish an Artifact to Kubernetes Next : Customize S2I Templates